Aceh (pronounced AH-chay) is one of the provinces of Indonesia and designated as a Special Territory of Indonesia, located on the northern tip of the island of Sumatra. Its full name is Nanggröe Aceh Darussalam. Past spellings include Acheh, Atjeh and Achin. 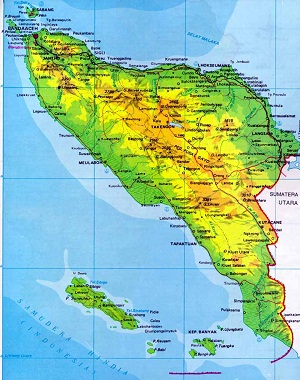 Of all the regions in Indonesia, Aceh, at the northwestern end of Sumatra, is the first to have come into contact with the world outside. Chinese chronicles of as early as the sixth century A.D. spoke of a kingdom on the northern tip of Sumatra named Po-Li. Several Arabic writings of the early ninth century, and later inscriptions found in India also mentioned the area. In 1292, Marco Polo, the famous Venetian adventurer, on a voyage from China to Persia visited Sumatra and reported that on the northern part of Sumatera there were as many as six trading ports including Ferlec, Samudera and Lambri. The irony is that this area, which had for so many centuries maintained contact with others, is at present one of the least known of Indonesia even among Indonesians.

Banda Aceh is the capital of Aceh and also the main gateway to the province. The Governor's Residence, was built by the Dutch in 1880 on the spot where the palace of the sultan once stood. This building is known as one of the historical sites with a unique architecture and completed with traditional house equipments.

This place is of course a restricted area and entering it must be with a kind of permission from the security guard.

Baiturrahman Grand Mosque is one of the most out-standing landmarks in the capital city. The old mosque that stood there before it was burnt down at the beginning of the Aceh War, was rebuilt in 1875, taking its present shape after a number of renovations and expansions.
Gunongan and Pinto Khop which are located at a few steps from the Pendopo are also charms of the city. Gunongan was erected around the 16th century during the reign of Sultan Iskandar Muda.
Kerkhof or Churchyard is a much visited site especially by Dutch visitors where the remains of more then 2,000 Dutch soldiers lie buried.